In a week or two, Claire will be turning three.  Yes, three.  I can’t believe it’s been three years since she was born, but the way she is changing tells me it’s true.  She’s definitely not a baby anymore, and not really a toddler either.  At three she’s well into the realm of the preschooler, and with that comes all kinds of changes I wasn’t prepared for when Beatrice turned three.  What kind of changes?  Well…

Babies defy their parents wills all the time, but in an innocent, she-doesn’t-know-how-to-coordinate-her-hands-yet-so-she’s-off-the-hook kind of way.  Toddlers defy their parents wills too, but the indiscretions are usually fairly mild, and again, you can be pretty sure your toddler didn’t expect the entire tube of toothpaste to come out when she squeezed it for the very first time.  She was exploring and experimenting.  By three and four, many more acts of defiance are open expressions of will.  The kid KNOWS you’ve said “no jumping on the bed,” she has banged her head while jumping on the bed once already and THE KID IS STILL JUMPING ON THE BED.

Previously attached-at-the-hip babies and toddlers can transform into kids who take off running when they are dropped off at a friend’s house and don’t come back for a goodbye kiss.  Sleep starts to consolidate and many kids who nursed through toddlerhood will wean now, either on their own or as a result of mom’s limit-setting.  Securely attached preschoolers will still want to reconnect with a trusted adult regularly through the day, but this increasing independence means more and more kids will be ready to go to preschool, art class or playdates without mom or dad at their side. 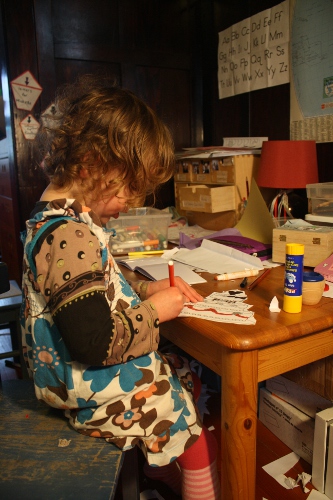 Scissors!  Pencils!  Colouring inside the lines!  Pedaling tricycles, swinging on big-kid swings, walking on balance beams and turning somersaults.  Some kids will start to enjoy recognizing letters at this age, especially the first letter of their name.  This is the phase in which you will find a million tiny pieces of paper hidden in every corner of your house as your preschooler learns to cut with scissors and use those bits of paper in imaginary play at the same time.

Preschoolers now know more of what they like and what they don’t like, and this will be reflected in the choices they want to make.  Clothing can become a Very Important Decision.  Same goes for food, and previously adventurous eaters may now start refusing to eat anything other than buttered toast and noodles.  Tasks like toothbrushing and handwashing are best handled in a regular routine, always done at certain times of day with no exceptions.  If there’s any uncertainty about the need to perform these tasks, be prepared for a battle of wills.

We always sing Supercalifragilisticexpialidocious while brushing our teeth.  Every night, it has to be exactly the same.  Before she’ll put on her pajamas, Claire wants to pretend to be trapped in Bea’s bunk bed, and I pretend to rescue her.  If I refuse, the meltdown takes longer to ride out than it would have taken to just play the “trapped” game in the first place.  I don’t know why three and four year olds love repetition and ritual so very much, but they do.  And if you can handle the Groundhog Day flashbacks, rituals can actually make the day flow more smoothly, even if it seems like it takes a long time to run through the games and rituals in the same way every day.

I’ve heard many parents say that they found the “terrible twos” much easier than they expected, it was age three and four that really challenged them as a parent.  I agree.  When Beatrice turned three, I had the added challenge of having a newborn to look after.  This skewed my perspective, making Bea seem much bigger and more capable than she really was.  After all, she used to be a tiny newborn and now she’s huge!  But three and four are still small in the bigger picture of an entire childhood, and the changes in wilfulness, independence, skill, ritual and choice are all normal, natural ways for a three and four year old to behave, as challenging as they may be from a parent’s perspective.