The Evolution of A Mama’s Workspace

In every house I’ve lived in I’ve carved out a little space for myself to write, sew and retreat to. In most houses it was tiny. A corner of the dining room table. A desk set up in a corner of the bedroom. A stack of books at the end of the couch. Before we had kids I usually set up some kind of space for myself in the spare bedroom, with my little university dorm room desk serving for both computer work and sewing. 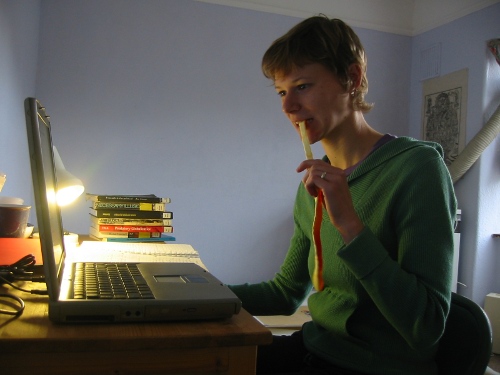 Once the kids arrived my spaces grew smaller and more transient, moving around the house as our need to use the space changed with each age and stage. Tom took over the desk when he started working from home and I worked more often in the main shared areas of the house, either cluttering up the space for everyone else or having to set up and pack it all away every time. It wasn’t ideal, but we made it work.

When we moved into this house I assumed the basement room would be used as a family room, somewhere to store all the toys and art supplies that wouldn’t fit upstairs and where we might have a couch and a space for the kids to hang out when they didn’t want to be upstairs. I set it up with a writing station and a bunch of shelves, put the couch in Tom’s office instead and did my own writing on the dining room table or in Tom’s office as before.

But the kids didn’t use the space. It was too cold and too far away from everyone else. The writing station got filled up with clutter that didn’t belong anywhere else and eventually the whole room devolved into a giant pile of stuff that needed to be dealt with. I realized that I could claim a corner of this room that nobody else wanted. 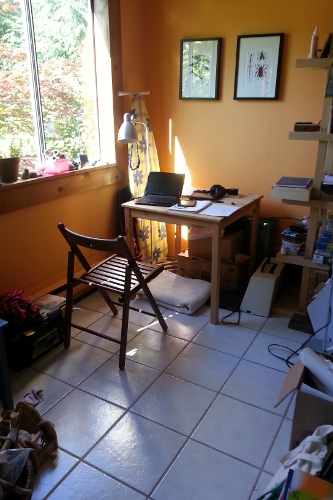 I moved in a small table, put my netbook and sewing machine next to it and hung some art on the walls. The piles of clutter remained, but I started to realize that this space was really going to work, and we started gathering a few other things to make it more comfortable. We got a small ceramic heater when the weather turned cold, Tom worked some computer magic on an old desktop computer that we had, and I nabbed a friend’s old computer chair when he went travelling and got rid of all his stuff.

Yesterday I finished another iteration of the evolution of this space, cleaning up the last of the piles of random stuff, setting up another freebie table and shifting everything over to this new workspace. The room has truly been transformed from a massive junk bomb explosion to gorgeous studio, and I am SO HAPPY with it. 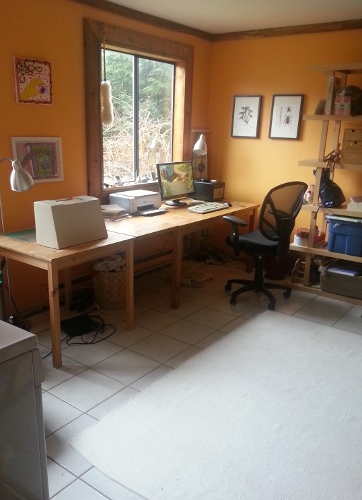 Space is an important element of many educational philosophies, including Waldorf, Reggio Emilia and Montessori. In these philosophies, the space itself is seen as a teacher, which sends messages to the children about what is valued. I remember reading something about Waldorf that went something like, “If there is disorder in the child, first attend to the disorder in the space.” The older I get, the more I appreciate this interplay between the physical environment and the mental one. It’s not always possible to have a beautiful, sun-filled atelier for ourselves or our children, but we can always make the most of the space we do have. Eventually, we may just discover a beautiful sun-filled atelier had been waiting there all along.