Some days don’t go according to plan. Today I was outside working on the Catbus, starting the sizeable job of replacing the poptop canvas. As I was up there working away at undoing the sand-encrusted screws I heard Tom call out, “goodbye!” and drive away.  All normal.  The next time I tried to go inside for a better screwdriver, I discovered that he had accidentally locked the girls and I out of the house. Uh oh.

Keep Calm and Carry On

If there’s one skill that’s worth honing in your parenting toolbox, it’s the ability to keep calm and roll with whatever life throws your way. It might be somebody throwing up on you in the night, or being accidentally locked out, or dealing with major illness. From the annoying to the life-and-death, everything is easier to deal with if you can keep calm and carry on.

After a few emails back and forth with Tom, I buckled everyone into their car seats, planning on driving out to where Tom was and picking up the house key from a hiding spot in the parked car.  I started up the Catbus, and noticed that the needle on the gas gauge was in the red.  Decision time – should we risk running out of gas on the highway in order to get the key, or wait and risk being hungry and bored?

Together we decided that it would be worse to run out of gas, so we carried on: I continued working on the poptop, the girls drew an elaborate picture of Laura & Mary on the back of a cardboard box that happened to be stowed in the van, I gratefully accepted a cup of tea from my neighbour and we eventually walked two blocks to the neighbourhood park, even though Bea wasn’t wearing any shoes. We ate up all the snacks I’d brought out to the van with us and by the time we were getting really hungry, Tom came home. 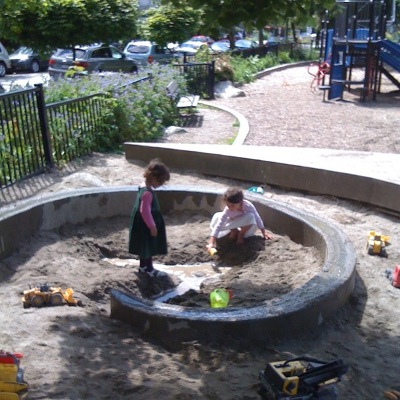 It wasn’t exactly how I’d planned for my day to go, and I didn’t get as much work done on the van as I’d hoped, because several of the tools I needed were still inside the house.  Freaking out wouldn’t have changed any of that. I’m becoming more and more a fan of open-ended days – fewer plans set in stone means fewer problems when things invariably go sideways.

No matter what goes wrong, there’s always something to be grateful for.  Sunshine after weeks of rain.  Happy children.  Kind neighbours.  And tomorrow I’m going to sort out an emergency key.