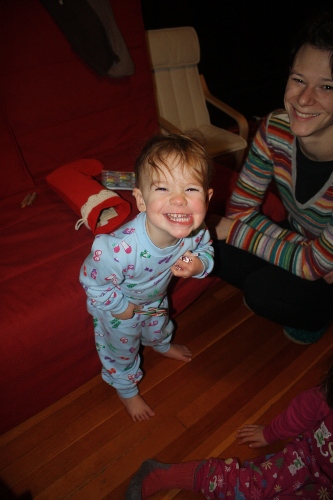 Claire on Christmas morning, about a week into the process of night weaning.

Itâ€™s January and Iâ€™m kicking off a year of playful self-discipline by focusing on my physical health. Januaryâ€™s a pretty good time to think about physical health: the holidays and their ritual sugar-binges are past (except for those last few rumballs in the freezer, shhh!) and it can feel good to settle back into regular routines for meals, exercise classes and daily activities.

I decided to focus on physical health first not only because itâ€™s a venerable January tradition, but also because itâ€™s part of the foundation that all other elements of self-discipline build upon. In Maslowâ€™s pyramid of self-actualization, physical health falls into the wide â€œphysiological health and safetyâ€ category at the base of the pyramid. Itâ€™s pretty hard to feel zen when youâ€™re hungry, and difficult to be patient when youâ€™re sleep-deprived after your toddler wanted to nurse all night.

When I was pregnant, the one thing I dreaded about caring for a newborn was the sleep deprivation. And it was true that I didnâ€™t sleep much when my babies were little, but I was expecting that. What I hadnâ€™t anticipated was the fact that sleep disruption would continue on through toddlerhood and the preschool years. According to Dr. Elizabeth Pantley in The No-Cry Sleep Solution for Toddlers and Preschoolers, this pattern is totally normal. Almost half of all parents of toddlers and preschoolers are awoken by their children at least once per night.

After researching and reading about night weaning a couple of months ago, I decided to begin the process the week before Christmas. I began by cutting out nursing sessions between 11pm and 4am, replacing them with co-sleeping cuddles and two statements, â€œNa-na (nursing) is sleeping now.â€ and â€œWeâ€™ll have na-na again in the morning.â€ After the first 10 days, I stopped nursing her if she woke up between bedtime and 11pm. She still nurses to sleep and between 4-7am.

Even though Claire doesnâ€™t talk much, she does understand most of what we say, and Iâ€™m sure she understood what I was saying. One night Tom woke up to Claire crying and he sat up in bed and calmly said, â€œClaire, please stop crying now. Itâ€™s time to go to sleep.â€ She took a deep breath, flopped down on the bed and went back to sleep. I was astounded!

Is Night Weaning Really About Self-Discipline?

I know that night-weaning appears to be more about changing my childâ€™s behaviour than my own, but I see it as a positive step towards my own playful self-discipline in a few ways.

Itâ€™s hard to feel playful in a fun and games sense about implementing changes to a toddler’s sleep routine. In many ways night weaning doesnâ€™t seem like a playful thing at all – Claire did some crying, I had a few nights where I slept even worse than usual, and a couple of times I doubted whether Iâ€™d made the right decision.

In the end I think it was the right time for us to night wean, and that it was a playfully self-disciplined choice. Night weaning was an experiment I was willing to take a chance on. It felt like the right thing to do at the right time, but if Claire had responded with truly anguished and prolonged screaming instead of a relatively short period of cranky fussing Iâ€™d have called it off and tried again in a few months. My choice to night wean was motivated by my own needs and the needs and abilities of my nursing toddler – I didnâ€™t feel pressured to night wean because someone else thought it would be a good idea.

The other half of this coin is, of course, getting to bed on time myself so that I can wake up well rested. It’s no good to take night nursing out of the equation and shortchange myself on sleep anyway by staying up too late.

Now that Iâ€™m sleeping a little better, Iâ€™m hoping to have more energy and patience for dealing with other challenges!

Have you night weaned a toddler?  How did it go?  How is your sleep now?  I’d love to hear about it!