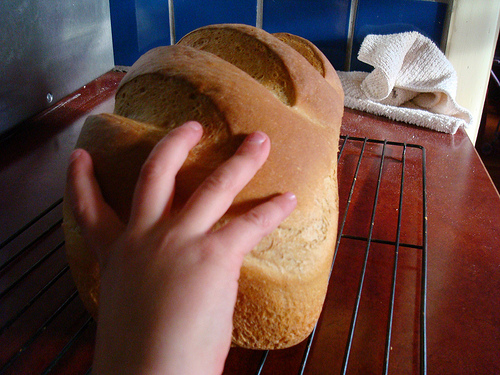 I’ve been gluten-free for about a month now.  After the initial difficulty, we settled into a new food routine pretty quickly, and for Claire and I the results have been really positive.  Claire’s a happier kid, more outgoing and less likely to spend a whole playdate clinging to my lap.  She doesn’t have a bad tummy or fight with Beatrice as much.  And the only times she’s complained of hurting legs has been when it’s pretty likely she ate some gluten by mistake.

Last year I worked on developing my Playful Self-Discipline, and I practiced inviting challenges, staying calm under pressure and developing good habits.  I made some good progress in certain areas, but in others it was pretty darn near impossible to budge the status quo.  No matter how hard I tried, I still felt like snapping most of the day during the last week of my cycle.

Intellectually and emotionally I wanted to be calm and intentional, but I felt like my body wasn’t on board.  I thought this was just the way it had to be, I’d accepted it as normal.  Doesn’t every woman feel angry and short-tempered the week before her period?  It’s certainly a well-worn meme.

Turns out that wasn’t the normal I have to live with.  One of the biggest changes I noticed after going gluten-free is that my mind and body feel calm.  My anxiety levels have dropped.  I don’t feel twitchy, my head is clear and the brain fog that I thought was from parenting has lifted.

Amazingly, I’ve found it’s much easier for me to step back and pause for a moment before responding to something distressing.  PMS is now more about simply having lower energy levels and less about being angry.

Going gluten-free hasn’t been a panacaea, of course.  I need to keep up my efforts to maintain those good habits I had started, because they’ll slip if I don’t stay on top of them.  But I feel like I’m walking freely instead of wading through mud now.  I’m more calm and relaxed.

In fact, I’m so calm and relaxed that now other people are impatient with me for being so slow.  Drivers have started getting antsy behind me when I take my time choosing a gap in traffic to turn left.  I’m not generally stressed out or in a hurry, and I forget that other people are.

That anxious, revved up feeling can be kind of appealing; I know I liked that feeling, back when I was working in an office and feeling very important, or plowing through mountains of coursework in University.  It’s definitely the appeal of coffee, North America’s favourite drug.  And it could possibly be part of the appeal of gluten-containing foods for people who are gluten intolerant and don’t know it.

For me, I’m happy trading in revved-up for calm and peaceful.  Even if it means passing the bread basket without taking a piece for myself.