Something interesting happens when I’m learning something new – I start applying it to the many different areas of my life to see how it fits. How do these new ideas explain or inform what I’ve already been doing all along? Can I see my choices or experiences in a different light, with more clarity, with less reactivity?

Yesterday I had a challenging morning. The day before I’d powered through the morning chores quickly so that I could do a kind of involved craft with the girls before our friends came over for a playdate. I was pretty on top of things and everyone was dressed and the house was tidied up in record time. Then we moved on to making sock puppets, and the sock puppets were a hit too! I felt like a homeschool/homemaking superstar! I was in control and it was AWESOME! I wanted more of that.

And so I started the next day with some more awesome ideas, thinking that we’d zip through morning jobs and violin practice before shifting seamlessly into a super-cool experiment to try and generate electricity with a coil of copper wire and a magnet. I was excited to get going and the girls were, well, not. My zest was met with the brick-wall response (surely well known by all you other mamas, right?) and the girls obviously had other plans, which involved reading the entire stack of graphic novels that Tom brought home the other day. 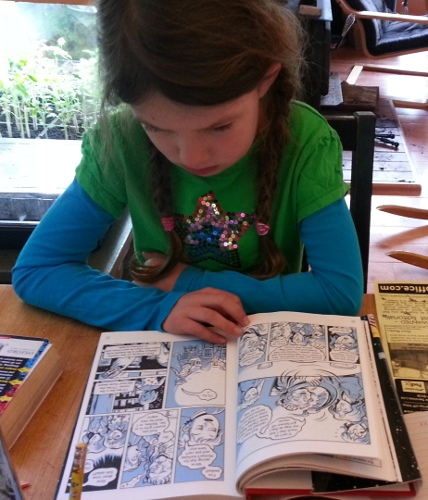 Now, the ideal unschooler’s response here is to recognize that the kids are obviously learning valuable skills by spending three hours reading. They’re solidifying reading fluency, strengthening their ability to concentrate for long periods of time, to know and choose what is interesting to them, and even potentially learning some second language skills by comparing the french tintin with the english edition of the same volume. And yet, I flailed. I was flooded emotionally, then I over-reacted to my husband’s unrelated grumpiness and ended up hiding in bed until I could operate as a fully functional human being again.

So what’s the NVC/neurobiology/somatic based empathy response to this? Clearly I have some issues about being in control vs. not being in control which rear their ugly head when my attempts to be in control are thwarted. There’s probably also some unmet needs of my own going on here – I know that whenever my kids have tantrums there are unmet needs behind that and I’m no different. The need to matter, to have something valuable to contribute. And probably the dopamine hit we get from achieving what we set out to do in goal-oriented behaviour (or the pain of NOT receiving that hit of dopamine) factors in there too.

I think this is why so many unschooling parents have some other outlet in their lives where the need to contribute and control can really shine. Some skill we pursue doggedly on our own, a home-based business or a role we take in the community to work or volunteer aside from the work we do supporting our kids. Because if that need to contribute and control is unmet, it will push itself in where it’s not really wanted or needed, creating rigidity and reactivity where flexibility and responsiveness are wanted instead.