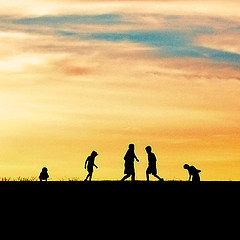 Since we’ve decided to homeschool this year instead of sending Beatrice to preschool, we’ve had the opportunity to be more intentional about planning playtime with other kids.  Some days we hang out with kids who have birthdays very close to hers, and other times she heads off to play with kids of a mixed age group at our local homeschool co-op.  This past week the kids at the co-op played together for about three hours straight, inventing an elaborate monster trap and running up and down the grassy hill in the late September sunshine.  Apart from looking absolutely idyllic, there are lots of benefits to mixed age play.

What Makes a Mixed-Age Group Awesome?

1. Mixed age play can be more creative. Older kids bring more developed skills, younger kids bring high energy and creativity, and the combination allows all ages to experience a greater creative freedom than they would have had on their own.  Same age groups have a higher tendency to get stuck in repetitive or aggressive play.  Creative, imaginative free play has been shown to benefit the development of “executive functions” of the brain, including self control and decision making.

2. Older kids can teach the younger ones. Whether consciously or not, children learn more from each other in mixed age free play.  Different skills can be shared and practiced in a mixed-age group with less competition than in a same-age group.

3. Children can try out different roles in a mixed age group. Younger siblings get to play at being the “big sister” when they play with younger kids, and an older sibling can experience being the little one when playing with kids who are older and bigger.  This helps the development of empathy and frees kids from their usual roles.

4. Mixed age play is the evolutionary standard. Mixed age free play in an outdoor setting is how kids played during most of human history.  Several children of varying ages playing together is also similar to the experience of being in an extended family, where there would be a number of siblings over different ages.  Large groups of children from the same birth year would have been less likely to happen in hunter gatherer groups.  While I accept that we no longer live in tribal societies, these kind of Continuum Concept ideas tie in with many of our other parenting choices, such as breastfeeding, co-sleeping and babywearing, and have been shown to contribute to moral, compassionate kids.

5. Real life is made up of mixed age groups. Whether in the workplace, socializing or meeting other parents, adult interaction usually involves groups of varied ages.  Spending all their time with age mates encourages age segregation and discrimination even when kids leave school and graduate as young adults.

Even though mixed age play is something I’m happy that we have in our homeschooling experience, there is also something nice about a playdate with one or two other kids who are the same age as Beatrice.  There’s a little more shrieking and spinning around in circles and a little less complexity in the imaginary games, but sometimes shrieking and spinning around in circles is fun too.  Myself and the other moms enjoy swapping stories of our same-aged kids’ antics.  What I’m aiming for is a good balance of friends and experiences for Bea, with kids her own age, younger and older, all with plenty of time for free play.