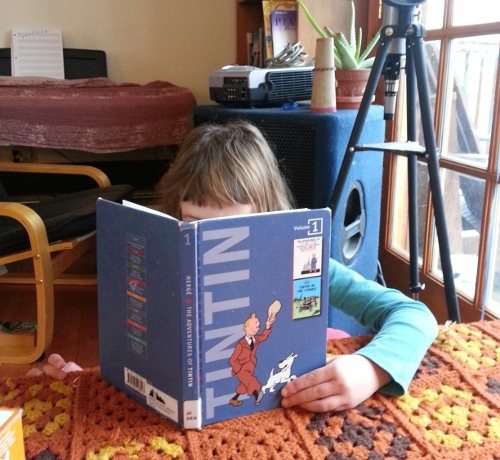 If I had to choose a theme for our house over the past three or four months, it would be Tintin. We have borrowed every copy of Tintin our local library has on the shelves multiple times, we have borrowed copies of Tintin from the city library and we have printed Tintin colouring pages off the internet. The girls made a few attempts to draw their own Tintin comic strips, and Claire now adds speech bubbles to all her drawings. Claire even made a stop-motion animation using characters cut out of a piece of paper and various speech bubbles to go with them. The girls have read Tintin in the car, on the couch, at the beach, and late at night in bed with a headlamp. I have listened to Claire narrate back every Tintin story she’s had read to her or that she’s decoded on her own by looking at the pictures. We translated Captain Haddock’s swears in the french version and discovered that they are radically different from the english version – “A thousand millions of thousand portholes!” – and that they don’t actually make any sense. They’ve even watched Tintin cartoons in the evenings with Tom – I always excuse myself and go elsewhere when they’re on though, because I don’t particularly like Tintin.

Being written in the 30’s and 40’s, they are enormously dated in terms of political correctness. Some are straight-out propaganda, written for the purpose of convincing the French that colonialism in Africa was acceptable (as in TinTin in the Congo). Others hit a little too close to home in terms of cultural and political realities, which may or may not be suitable for children (as in The Land of Black Gold). They are violent (all of them have some degree of semi-slapstick violence, others contain gangsters and criminals), contain scientific errors (as in Explorers on the Moon) and exploit cultural stereotypes for fun (just about every character is a stereotype, except for TinTin himself, who doesn’t seem to fit any kind of category.) TinTin is, I suppose, living every teen or young adult’s fantasy of being well-known, accomplished, travelling extensively, having adventures instead of working the daily grind and having no parents or family ties to restrict him.

And yet, the kids don’t care. I do my duty by explaining that the way some of the characters are treated or portrayed is inaccurate because people had different attitudes and understanding about cultures back then, just like they didn’t understand how space travel worked. They accept my explanations and lecturing with patience, then go back to examining the comics closely on their own for hours at a time.

What is it about TinTin that kids love so much?

– Tintin contains a quality of dense, interesting writing at various reading levels alongside colourful and engaging illustrations that I don’t see anywhere else. And trust me, we have looked at a LOT of other graphic novels and comic books over the past few months, looking for something else that would satisfy this desire for Tintins. I think the combination of text and illustration found in Tintin supports developing reading skills for kids who have some ability to decode words phonetically but aren’t yet reading fluently. The kids can dip in and out of the text, reading words that they are able to while skipping over the more challenging words and still being able to mostly follow the story with the help of the pictures. As they re-read them, they pick up more and more of the words and meanings.

– Tintin is not dumbed down, sanitized or “childish”. So much of today’s children’s literature is mind-numbingly dumbed down and sanitized, which makes adults feel safe but makes kids feel bored. I remember being a kid and being hungry for any information that gave me clues about how the adult world worked. Tintin is ripe with this kind of information: that people sometimes say or do things to trick others, that situations are not always what they seem, that a person may be very attracted to someone who can’t stand the sight of them, that true friends look out for each other.

– Tintin is funny. Despite the violence, racism and cultural stereotypes that make adults cringe, Tintin manages to be funny in a fairly non-threatening way for kids. We also looked at two of today’s most popular graphic novels, the Amulet and Bone series, and both of those were scary to the point of making it hard for Bea to fall asleep at night. Tintin is generally silly and lighthearted, and doesn’t have any scary monsters that prowl through the night.

– Tintin indulges the fantasy of being powerful, adventurous, well-respected and in relationship with a few close friends that many kids seek. Heck, many adults are still working on those things. It’s fun to see a character live out your dream life in a book.

– Maybe, just maybe, kids love Tintin because their parents don’t like them so much. Tom loved Tintin as a kid; now he’s bored with them. I never liked Tintin much, and when the girls brought them home I was uncomfortable with the racism and violence. And maybe, just maybe, the kids pick up on that and are curious – why doesn’t mom like these? I have to find out! They must be really good!

At the end of the day, Tintin is just another phase in my children’s interests.

I can see the shift coming already. Other books are starting to be more interesting. I’ve heard the words, “Tintin is boring now that I’ve read them all,” come out of Bea’s mouth. And the sun is starting to return and the days are longer and we are spending more and more time being active and outdoors.

Tintin was the catalyst for a lot of learning around here: Bea essentially developed from a non-reader to a kid who can read independently and fluently by spending many, many hours reading Tintins. Claire explored the joys of narrative, cartooning and slapstick humour – she loved the silly visual jokes of people slipping on icy boat decks or bonking their heads on things.

Have my kids absorbed any harmful attitudes towards African people or alcoholic mariners? Maybe. Claire mentioned to me that she thought one of the kittens on her pajamas was drunk because it had a swirly line near its head, and I know for sure that idea came from how Captain Haddock is drawn.Â But I sincerely believe that no matter what books they read, they will treat other people the way they’ve been treated by me and the other people they spend a large amount of time with.

In any case, I’d rather limit and control the real-life situations I think are harmful than the books I think are dated and politically incorrect. Maybe someday they will want to read Mein Kampf or To Kill a Mockingbird or The Lord of the Flies, and I hope they will have the wisdom and empathy that comes from real interactions with real people to be able to interpret what they read there with grace and sensitivity, and that they won’t be afraid to read books that deal with things that are unfamiliar and challenging.

Do your kids read Tintin, or other books you don’t particularly like? Or do you carefully vet the pile of library books before hitting the checkout? How did you come to that decision? I’m curious about how other families deal with this issue.