Last week we drove from our home in Vancouver to my parents’ house in the prairies.  It’s a pretty long way. Two full 11 hour days of driving, normally.  Last year we made the journey in three days.

This year we drove the Catbus, our new-to-us 1984 Westfalia.  What could be a more perfect trip to make in a camper van?  I knew it wouldn’t be able to go as fast as our car, but I figured we could make the trip in three or four days.  Before we left Tom casually mentioned that maybe we’d make the drive in 5-6 days.  “What!?”  I said, “That will take ages!”

Girls, The Van is Broken

Our first breakdown happened at the end of the first day.  We arrived at the campground after a relatively short drive, pootled around a bit sorting out some campsite issues, backed the bus into place and then – BANG!  Huge clouds of steam rose all around the back end of the van, and all the expensive coolant the mechanic had just put into the van for the third time drained out into the gravel.

We were all in shock.  We’d never had a vehicle break down in such a dramatic fashion before.  But it was easy to look on the bright side: we were in a beautiful campsite, we had lots of food, everything we needed to spend the night, and towing insurance to pull our van to a garage in the morning.  We were delayed by almost a full day, but it was relatively low stress.  While Tom sorted out the van the next day, the girls and I spent the day on a grassy patch beside a pristine mountain lake. 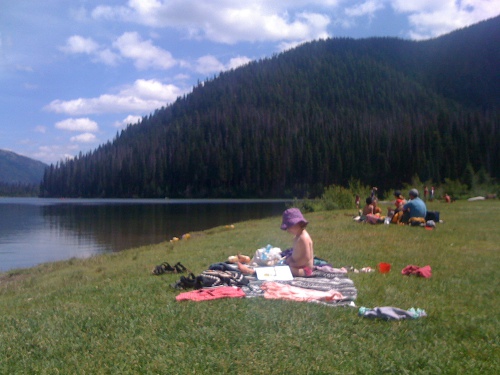 The second breakdown was the opposite of the first in many ways.  We’d been stuck in slow-moving traffic for several hours, trapped behind a mudslide near Banff that closed the Trans-Canada Highway.  Just as we were nearing the place where the backhoes were digging out the mud that covered the highway, Tom mentioned that he was worried about the van.  The temperature was dangerously high, but we were SO CLOSE to getting past the traffic blockage.  10 car lengths, maybe.  The night was getting dark, the diggers and dump trucks were banging and scraping along the road, police cars had their lights going and the clogged highway was a generally chaotic place to be.  Then we heard the back of the van explode, and the hiss of coolant and water steaming on the hot engine.  Great.

We all freaked out a little.  Tom got the van onto the side of the road and opened up the back of the van to check out the damage while I tried to console the crying children.  “Where will we sleep tonight!?” Bea cried, and I thought about a tow truck trying to get through all the clogged traffic behind us, and the wall of mud blocking traffic from coming in the opposite direction, and I said, “Maybe we’ll just have to sleep here in the van tonight.”  WRONG THING TO SAY TO DISTRESSED CHILDREN!  This was definitely not a nice place to spend the night.  Even more crying.  The black clouds began sending down forked lightning and the air reverberated with thunder.  It started raining, hard.  The diggers were still digging and banging and scraping on the road.  How on earth were we going to get out of this one, I wondered?

And then Tom discovered that the part that exploded was a little plug that went into the coolant tank, and that we could theoretically drive the van without it if we filled up the system with water again.  Some water might splash out of that little hole, and it wouldn’t be great for the engine, but it would get us the 2km to Banff.  So all our drinking water went into the coolant system, we crossed our fingers and toes, and the van started up and drove us down the road again.  We slept on the side of the road in the industrial area, and the next day Tom found the part nearby for $5 and we were rolling along the road again.

We finally arrived at my parent’s house six days after we left Vancouver.  Right on schedule.

Life Lessons From Our 1984 Westfalia

Cars and people are not that different, really.  Vans blow up when things get too hot and there’s more pressure than the system can handle.  People blow up in anger when they get hot and stressed out too.  So stay cool.  Release that pressure.  Go at a comfortable speed.  Avoid traffic jams.

We’ll get there when we get there, and that’s OK.