Everyone could see it coming except me.

Flap was bigger than all the other chickens because she was a week older. She had a redder comb because she was the dominant hen. She just happened to be very pretty, and more colourful, more outgoing and more than a little bossy.

When she started crowing I thought she was just testing out her voice, just cackling a little louder than usual. And then the neighbour kids came over and said, “I’ve never heard a hen make a sound like that! I bet it’s a rooster!”

A rooster! Of course.

Now I can’t believe I ever thought otherwise. The fact that Flap is a rooster is as plain as the sun in the sky. He crows in the morning and whenever he hears us hanging out in the yard. He’s getting increasingly difficult to catch, although he’s still friendly to us when we do catch him. He leads all the other hens in exploring the yard whenever they are out of their enclosure, although he doesn’t seem to have any sense or ability to protect the flock. The other neighbour’s giant dog came up to sniff and bark at him from the fence, and Flap just stood there, looking for all the world like he was wishing the fence would disappear so he could take on that dog.

None of the neighbours mind us having a rooster in the backyard, so Flap will stay with us for the time being. Maybe next spring we’ll get lucky with a broody hen, and maybe that hen will hatch some chicks who will grow up and lay blue eggs late next summer. Or maybe I’ll have chicken soup sometime this winter. I guess we’ll see. 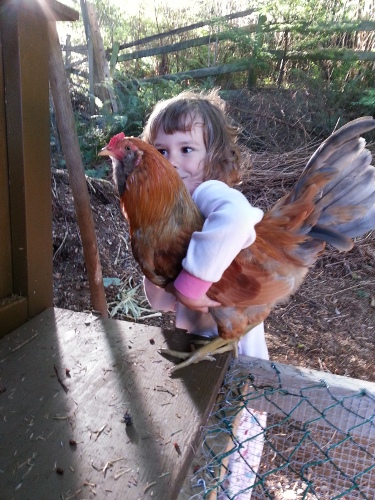