The start of 2012 is feeling very different from the start of 2011.  Last year I wanted to take on big projects and create lasting change in my life.  I was fired up and ready to work at things.  This year, I’m feeling more calm.  I don’t know whether there will be big changes coming this year or not, and I’m willing to take a more measured approach.  Last year I learned that small habits are easier to build on than grand, sweeping changes, and I can work with that. 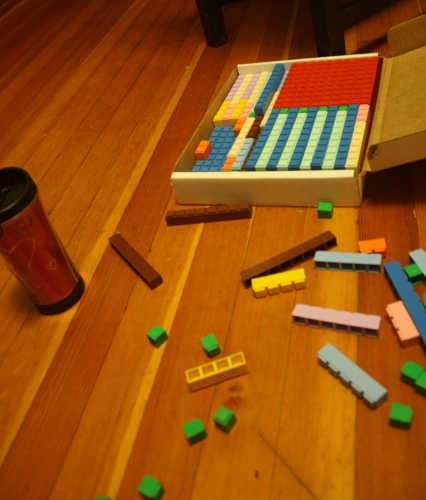 Yesterday I found a good example of the kind of change I want to build on this year.  I’d given Beatrice her math manipulatives to build with after she finished her math worksheet, and she played with them carefully all day long.  I wanted to put them away several times, to avoid them getting lost, and I worried about how expensive they are and how much it would suck to have an incomplete set.  She wanted to keep building.  Before dinner I asked her to put them away and make sure they were all there.  When I looked over I saw that she’d filled the box with blocks arranged in lovely patterns, but there was a big gap where there were some blocks missing.  I grumbled about how I knew they would get lost and I asked her to help me look for them.  We looked everywhere with no luck.  I grumbled some more.  And then, after some time, I went back and looked more closely at the box.  I realized that Bea had packed the blocks in there more tightly than I usually do, and the “missing” blocks had been there all along.

In 2012 I will have more positive assumptions than negative ones.  I will see the blocks that have been there all along that I had previously talked myself into believing were lost.  I will pay attention to the important details, and soak up the wonderful things the world has to offer.

It’s a bit of mental martial arts, catching those negative stories and turning them into positive thoughts.  But speaking well to myself inside my head is a habit that I can practice and make “just what I do” by doing it regularly. 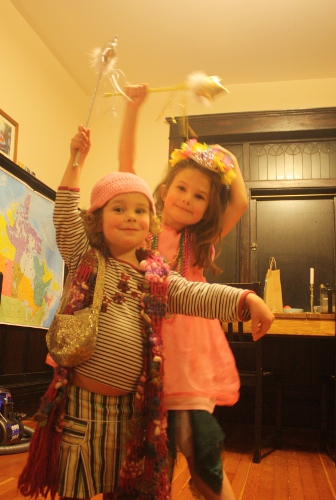