She might not know it, but my sister-in-law changed my life by sending me a copy of New Active Birth by Janet Balaskas.Â  I was pregnant, expecting my first baby.Â  And, I knew nothing about childbirth.Â  Well, next to nothing.Â  I knew it was going to hurt like hell, I knew my mother had two terrible posterior labours and I knew women went to the hospital and had babies on hospital beds.Â  So when I received this book and started reading it I was totally blown away.Â  I looked at the pictures of these amazing women giving birth standing up, leaning on their partners, squatting or kneeling and I examined their faces.Â  I saw the power, the surrender, the pride and joy and amazement and ecstasy and a little seed began to germinate in my mind.Â  That seed gradually grew and grew and led me to change from an obstetrician’s care in a hospital setting to a midwife’s home-based care when I was 26 weeks pregnant.

If you had asked me 26 weeks prior to that if I would ever consider a home birth I would have said, “probably not.”Â  Yet the primary reason that I changed my birth plans was the importance of having the freedom to choose whatever position I wanted to give birth in.Â  After reading and learning as much as I could about birth I understood that staying active and avoiding unnecessary interferences would allow me to birth instinctively and naturally, and if being at home with a midwife increased my chances of those things, then I would stay home.

I say that my sister in law’s copy of New Active Birth changed my life because before I read that book I had never seen pictures of women giving birth naturally.Â  The only image I had in my mind of a woman giving birth were the images put there by the media, by the portrayal of birth in movies and television shows.Â  Hollywood is not known for it’s realism, I know that.Â  But movies such as Children of Men only serve to perpetuate the myth that the natural way for a woman to give birth is on her back in bed.Â  For those who haven’t seen Children of Men, the scene I am referring to involves a young, inexperienced pregnant woman giving birth without a trained attendant.Â  The woman is in labour and has a man with her who is helping her search for a safe place to give birth, and when they find a safe room she goes in, sees a dirty, old mattress on the floor, and immediately lies down on her back and allows the man to tell her when to push.Â  If I had seen this film before giving birth myself I might not have given it a second thought, however, after experiencing the power of the birthing instinct during my daughter’s home birth a few months earlier, I was outraged.Â  “Who would just lie down and let some man tell her when to push!?” I shouted at my husband.Â  A labouring woman left to her own instincts, with no external authorities directing her actions and no ideas planted in her mind about the “correct” way to give birth is very, very unlikely to choose to lie down on her back to deliver a baby. 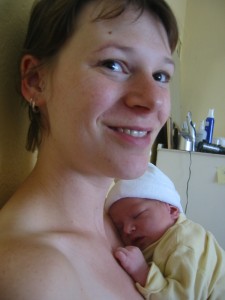 In order to increase the number of natural, vaginal deliveries in developed countries we need to see more positive portrayals of women giving birth in active, upright positions in movies and TV shows.Â  Now when I learn of a friend or family member who has become pregnant, I send her a copy of The Business of Being Born, which is full of fabulous scenes of happy, healthy, active normal births as well as the reality of hospital birth for riskier deliveries.Â  We need to plant a seed in the minds of pregnant women everywhere that will grow into a plant that will sustain them during the trials of labour with the knowledge that gravity is helping bring the baby down, that staying mobile and upright helps the pelvis open to accommodate the baby’s head, and that with a natural birth comes an incredible power, surrender, pride and joy.Â  That copy of New Active Birth changed my life because it opened the door of possibility that led to my successful home birth, and the amazing sense of empowerment I felt in the days, weeks, months and years that followed.Â  After pushing two babies into this world, I know that I can take on the most incredibly difficult and painful of tasks if necessary, and that the satisfaction and joy on the other side is worth it all.

This post is part of the Healthy Birth Blog Carnival at Science & Sensibility, A Research Blog About Healthy Pregnancy, Birth and Beyond from Lamaze International.Â  Check out the other entries in the carnival here!

Previous post: Works for Me Wednesday: Most Popular Parenting Resources