Weâ€™ve entered the toddler stage that many parents dread: biting and hitting. Itâ€™s definitely not a fun thing to deal with, but itâ€™s really common. Biting and hitting in toddlers is due to two big things going on in their development: an increase in independence combined with a lack of impulse control. Toddlers now understand that they are separate people, they know what they want and they are on a mission to get it. As Beatrice used to say, â€œMama, I just want what I want!â€

While Bea didnâ€™t bite or hit in the same way as Claire is doing now, she expressed her frustration by throwing some really storming tantrums. I remember getting to this particular stage when Bea was a toddler and realizing just how much I did not know about parenting. I took the tantrums personally (and seriously), and I frequently came to the end of my rope. It was also at this point that I realized that I truly could not MAKE my child do anything she didnâ€™t want to do. It was a humbling experience. 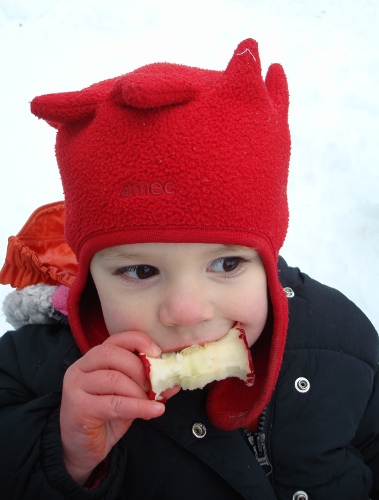 Impulse Control and the Prefrontal Cortex

In the years since Bea was a toddler Iâ€™ve done more reading and talking to other parents about child development and discovered a fact that should be given out to all new parents when their babies are born. Itâ€™s that important.

Babies and toddlers lack the brain structures in the prefrontal cortex that allow for good impulse control.

What this means is that babies and toddlers simply cannot stop themselves from doing something they have the impulse to do. They get frustrated, think about hitting and the emotion overwhelms them. Then they immediately hit. The part of the brain that says, â€œhang on, maybe hitting my mom in the face isnâ€™t such a good idea,â€ hasnâ€™t formed properly yet.

Understanding that toddlers and young children are not yet developmentally able to control their impulses well (or much at all) helps me stick with Gentle Discipline when faced with really problematic behaviours like biting and hitting. Â Being gentle doesn’t mean being permissive or letting kids think that biting is ok, because it’s definitely not, but understanding how a toddler’s brain is different from an older child’s helps me have realistic expectations of their behaviour.

Big developments in the prefrontal cortex happen around the ages of 1, 3, 6 and again at puberty. Research also suggests that this area continues to develop until the ages of 25 or 30. The prefrontal cortex controls â€œexecutive function,â€ which governs self-control and helps us decide what behaviour is socially acceptable or not. Itâ€™s one of the main parts of your brain that gets all blurry when you get drunk, which may explain why adults act more like toddlers when theyâ€™re sloshed.

Itâ€™s a mixed blessing. Low impulse control and little awareness of socially acceptable behaviour is a big part of what makes toddlers so pure and adorable when they ask you to nurse their stuffed animals or wave hi to every car they pass while crossing the street. Itâ€™s also what makes toddlers throw tantrums and bite their sisters.

What should you do if your toddler bites someone?

Even though a toddler really canâ€™t be expected to show good impulse control yet, itâ€™s important to make it clear that biting or hitting is not ok.

Eventually your toddler will learn some more language and social skills, and her prefrontal cortex will mature, allowing her to remember to use those words and social skills instead of biting.

For more information about brain development in toddlers and preschoolers, check out Dr. Gordon Neufeld’s parenting courses.
Patty Wipfler at Hand in Hand Parenting also has some good techniques to use with toddlers who bite.

If you’re still looking for more insight on what Gentle Discipline is and how to parent a young child from that perspective, check out my ebook, The Parenting Primer: A guide to positive parenting in the first six years.

Have you been through a biting or hitting stage with your toddler? How did you teach alternatives to hitting?