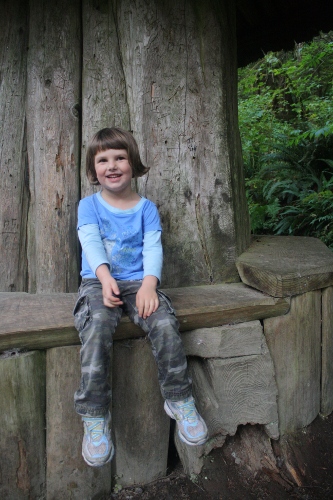 I had something of an epiphany this past week. Beatrice had been growing increasingly bored with playing either on her own or with Claire, and this boredom was expressing itself as the usual suspects: poking her sister, squawking at me, refusing to share. I wasnâ€™t sure what I could do about this. With an 18 month old toddler around the house there wasnâ€™t much dedicated time to pay attention to Beatrice one-on-one without risking Claire destroying some other part of the house, or climbing all over us as we tried to read a story together. I had sort of brushed the situation under the rug in my mind, thinking, â€œWell, Claire will eventually grow out of this and weâ€™ll just have to wait until that happens.â€ In the meantime, Bea was still upset.

â€œWell Bea, that was your job when you were Claireâ€™s age,â€ I said. â€œBut now youâ€™re much bigger and there are many more things you are able to do now. Claire canâ€™t do many other jobs, so letâ€™s make feeding the cat her job and weâ€™ll find another big-girl job for you to do.â€

â€œOkay!â€ Bea stood back and let Claire feed the cat, and we brainstormed some other jobs that she might be able to do. I thought a bit about what job Iâ€™d most like to delegate, and what jobs would be within her abilities. We agreed that her new job would be to wipe down the table after meals.

This one simple change sparked off a whole transformation in attitude. She then volunteered to do other jobs – clip a sprig of rosemary from the garden, â€œreadâ€ to Claire while I went to change over the laundry, wash dishes in the sink while I loaded the dishwasher, scrub down the cupboard doors while I mopped the floor. I realized that what she really wanted was to feel competent and needed, and assigning her some chores gave her a meaningful, productive place in the family.

This has extended into smaller things too, things that more easily go unnoticed. Â Like giving her bare toast, a butter knife and the butter dish instead of just quickly buttering her toast for her. Letting her pour her own soy sauce, scoop her own yoghurt, put away her own laundry. We haven’t yet gone to the level of making a chore chart or sticker chart to keep track of these jobs, and I suspect doing so would take away a good deal of the joy and enthusiasm that she currently has for doing these jobs. I’d like to nurture her intrinsic motivation as long as I can, and hold off on the extrinsic motivators like stickers, money and treats.

Like so many aspects of parenting, this is something I had read about and knew intellectually, but had to have a real-world reminder to put it into practice. Iâ€™d forgotten that she had grown since I last thought about what jobs she could do for herself, but kids grow and change so quickly, and she wasnâ€™t being challenged at all. Now it seems like the more I ask her to try to do for herself, the more she rises to the occasion. It feels like a total transformation, but itâ€™s really just the ongoing, invisible magic of maturation. Itâ€™s reminded me that children will live up or down to our expectations of them, and they are generally more capable than we give them credit for.

Do your kids do chores? Are they happy about it? How do you help your kids build up their competence and motivation to help out around the house?

Previous post: Filled Up With Love, Healthy Food and Dessert